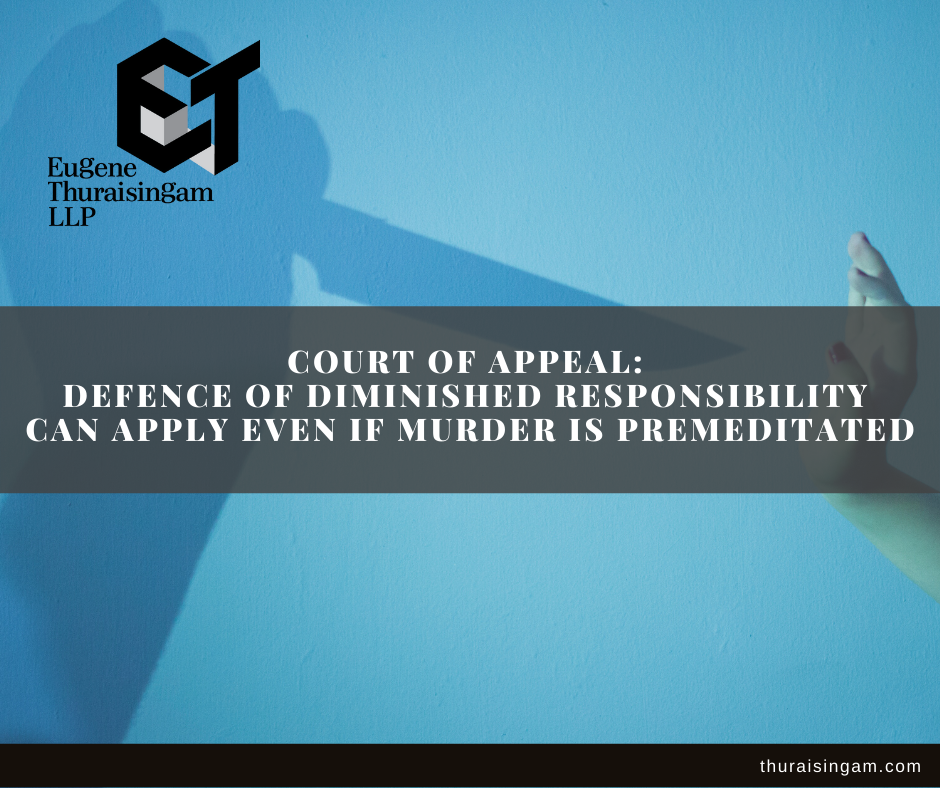 Should a person who has planned and carried out a murder be allowed to argue that a mental disorder had diminished his responsibility for the crime? This was the question that the Court of Appeal was faced with in the recent case of Ahmed Salim v Public Prosecutor [2022] SGCA 6 (“Ahmed Salim”).

Intuitively, one might think that the above question should be answered in the negative. Surely the act of planning itself demonstrates a degree of rationality, which should in turn nullify any claim that the offender was operating under some mental impairment.

However, the Court of Appeal in Ahmed Salim answered the question in the positive, and held that even if a murder is carried out in a premeditated manner, the partial defence of diminished responsibility can still apply. In doing so, the Court of Appeal preferred a more nuanced approach.

Before we get into the Court of Appeal’s reasons for this, it would be germane to first lay down the trial judge’s findings of fact in Ahmed Salim.

2. The trial judge’s findings of fact

Ahmed Salim (“Salim”), a male Bangladeshi national, and Nurhidayati Bt Wartono Surata (“Yati”), a female Indonesian domestic helper, met sometime in May 2012. They began a romantic relationship and saw each other on alternate Sundays. They had sex about once a month.

As their relationship grew deeper, Salim and Yati agreed to get married in December 2018. Although they had not yet eloped, Salim’s testimony at trial was that he regarded his relationship with Yati as that of “husband and wife” and that they had promised to be faithful to each other.

Sometime in May or June 2018, Yati started dating another man (“Shamim”), who was a Bangladeshi plumber working in Singapore.

Suspecting that she might be seeing someone else, Salim confronted Yati, who admitted that she was indeed in a relationship with Shamim.

In July or August 2018, Salim and Yati began seeing each other again. However, Salim never got over Yati’s relationship with Shamim and they argued frequently.

Sometime in October 2018 and early November 2018, Yati got to know one Hanifa Mohammad Abu (“Hanifa”) on Facebook. Hanifa was a Bangladeshi working in Singapore as a general fitter. They met and began having sex within three weeks of getting to know each other.

On 9 December 2018, Salim once again suspected that Yati was seeing someone else. That night, Yati called Salim and revealed to him that she had a new boyfriend (Hanifa). Yati wanted to break up with Salim, but Salim persuaded her to meet him at the Golden Dragon Hotel one last time on 30 December 2018.

Once in the hotel room, Salim and Yati had sex for the first time that night. Salim attempted to convince Yati to break up with Hanifa but to no avail. She also refused to let him check her mobile phone. The trial judge found that Salim then wrapped a bath towel around her neck for the first time that night and threatened to kill her if she continued dating Hanifa and if she did not allow him to check her phone. However, he then released the towel and they had sex again.

It was disputed whether after they had sex a second time, Yati had uttered certain humiliating words to Salim in the course of another argument.  After the argument, the trial judge found that Salim proceeded to strangle Yati with the towel. He then retrieved the rope which he brought with him in his pocket and tied it around Yati’s neck. Thereafter, Salim pressed a towel over Yati’s mouth for about 10 to 15 seconds. Finally, he twisted her head from left to right with considerable force.

3. The Court of Appeal’s finding: the partial defence of diminished responsibility can apply even if a murder is premeditated

In the course of trial, psychiatric evidence was adduced by Salim showing that he was suffering from adjustment disorder (“AD”) when he committed the killing. The Prosecution did not dispute this.

Salim sought to argue that the AD substantially impaired his mental responsibility for the murder, and thus that he should have recourse to the partial defence of diminished responsibility.

The partial defence of diminished responsibility is set out in Exception 7 to section 300 of the Penal Code 1871. It is a “partial” defence because, if proven, it does not completely exculpate the offender from all criminal liability, but reduces his culpability from murder to that of culpable homicide. The result of this in Salim’s case would have been that he would have escaped the mandatory death penalty under section 300(a) of the Penal Code.

The difficult legal question that the Court of Appeal was faced with was whether an offender who had deliberately planned a murder should ever be allowed to raise this partial defence (at [34]).

In the Court of Appeal’s view, there were limited circumstances in which an accused person who had planned and carried out a murder could establish that his abnormality of mind had substantially impaired his mental responsibility for his actions. These circumstances are where an accused person can demonstrate that his mental disorder impaired his rationality in coming to the decision to commit the murder. In other words, the fact that one might carry out the logistics of a murder in a rational manner does not necessarily mean that one’s decision to commit the killing was rational. The important distinction here is between one’s rationality and responsibility for deciding to commit the act, and one’s rationality in following through with that decision.

The Court of Appeal illustrated this distinction with reference to the case of G Krishnasamy Naidu v Public Prosecutor [2006] 4 SLR(R) 874 (“Krishnasamy CA”). In that case, the accused person, who was suffering from a type of psychosis known as morbid jealousy, premediated the murder of his wife and carried out the murder according to his plan. Even though the accused carried out the murder in a rational and planned manner, the psychiatric evidence was strong enough to show that, at bottom, his actions flowed from his (irrational) decision to kill that was, in turn, a product of his mental disorder. The accused in that case was therefore successful in raising the diminished responsibility defence.

In Salim’s case, the Court of Appeal took the opportunity to make two further refinements to the principles gleaned from cases like Krishnasamy CA. First, where it is the decision to carry out the offending act that is said to be disordered, the accused must show that but for his abnormality of mind, he would not have made that decision. This was a necessary limitation to exclude cases where the accused person would have made the same decision even if he was not suffering from the relevant abnormality of mind (at [51]). Second, the accused must prove on a balance of probabilities that in executing his intention to murder, he had no realistic moment of rationality and self-control that would have enabled him to resile from that intention or plan. This was because the failure to resile may show that the accused had chosen not to resist killing the deceased, instead of having been unable to resist it. Diminished responsibility will only be made out if the accused can show that he was unable to resist the impulse to kill, and not merely that he did not do so (at [52]).

The practical effect of the Court of Appeal’s pronouncements above is that it will only be in very rare cases that accused persons who premediate and execute a murder will be successful in proving diminished responsibility.

On the facts of Salim’s case, the Court of Appeal found that Salim was rational, had self-control, and was fully able to comprehend events at the critical moment when he finally decided to kill Yati. Therefore, Salim failed to establish the partial defence of diminished responsibility because there was no substantial impairment of his mental responsibility for the murder.

The Court of Appeal’s decision in Ahmed Salim provides helpful clarification on a novel point of law: i.e. that even if a murder is premeditated, the partial defence of diminished responsibility can still apply. This sets the stage for future courts to consider this important matter in greater detail as and when such cases arise. 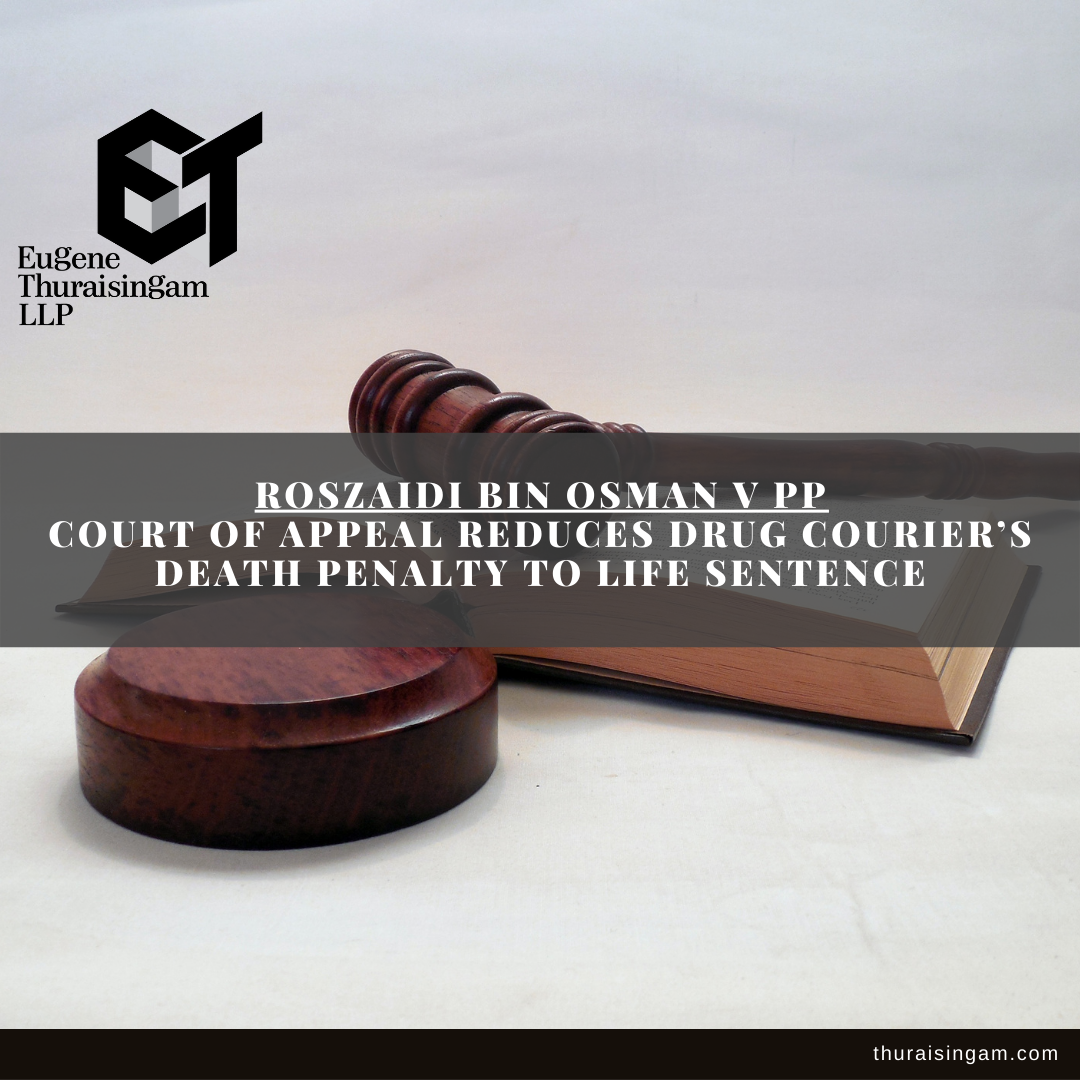 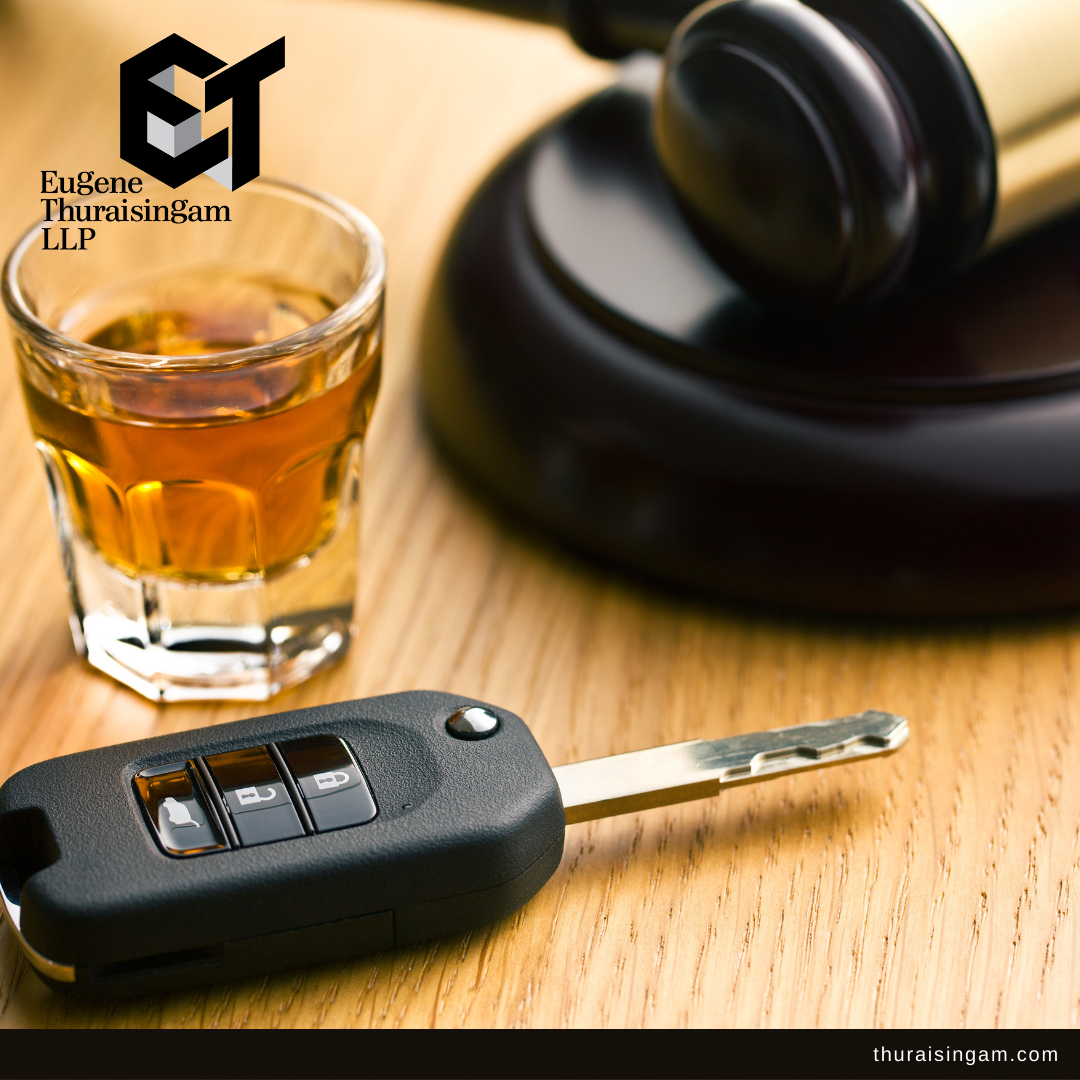