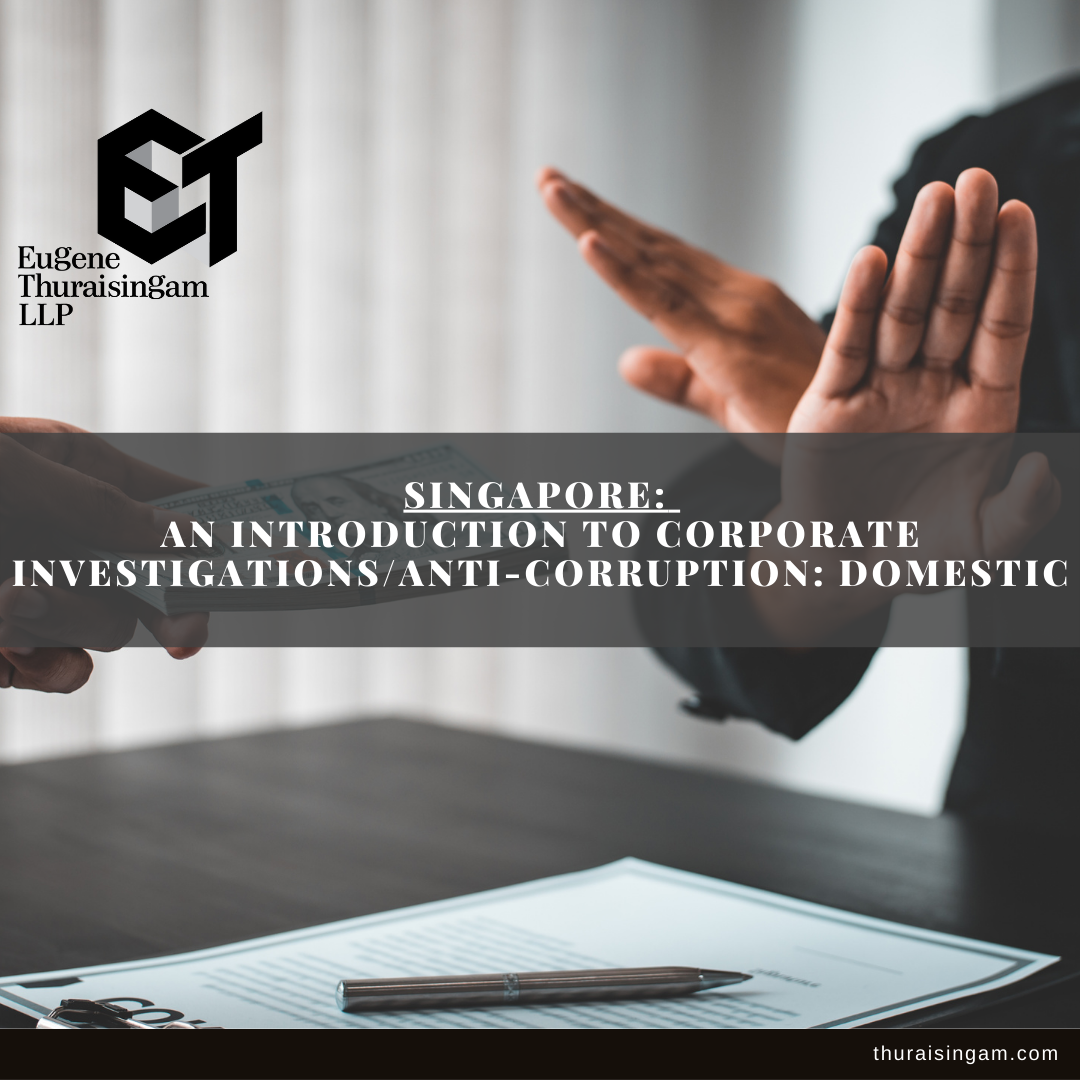 Singapore is renowned for its stable and effective system of political and corporate governance. These standards have positioned the country as an attractive financial and business centre for the world, grounded in strong principles of economic meritocracy, fair play, and the rule of law. It has a clear and predictable regulatory framework, upheld by impartial regulators who are generally regarded as sophisticated and efficient. Businesses seeking to do business in this fertile climate must be prepared for strict regulatory scrutiny into their day-to-day operations.

These are some of the key regulatory authorities empowered to investigate and/or prosecute corruption and corporate misconduct in Singapore:

(a) Attorney-General’s Chambers (“AGC”): In Singapore, the Attorney-General is also the Public Prosecutor who is solely responsible for the control and direction of all criminal prosecutions and proceedings. Officers of the AGC Crime Division, particularly from the Financial and Technology Crime Division, act as Deputy Public Prosecutors who conduct the prosecutions and appeals of all white-collar crimes and commercial offences, although some regulatory prosecutions are devolved to in-house prosecutors from the various enforcement agencies.

(b) Corrupt Practices Investigation Bureau (“CPIB”): This is the exclusive anti-corruption agency dedicated to investigating offences under the Prevention of Corruption Act (“PCA”), the Corruption, Drug Trafficking, and Other Serious Crimes (Confiscation of Benefits) Act (“CDSA”), and other related offences. The PCA has a wide scope that criminalises both monetary and non-monetary bribes in the public and private sector. The CDSA makes it an offence to launder bribe money and empowers the State to confiscate proceeds of corruption. The CPIB is an independent body that reports directly to the Prime Minister’s Office, and its officers have extensive investigative powers under the PCA in addition to the general investigative powers given to the police by the Criminal Procedure Code (“CPC”).

(c) Singapore Police Force (“SPF”): The Commercial Affairs Department (“CAD”) is the main department of the SPF responsible for investigating white-collar and other corporate offences under the Penal Code, the Companies Act, the Security and Futures Act, amongst other statutes. CAD officers have wide investigative powers under the CPC to interview and record statements from individuals and order the production of documents. Warrants may be issued in the event of non-compliance.

d) Monetary Authority of Singapore (“MAS”): As Singapore’s central bank, the MAS is responsible for regulating and supervising the financial services sector. It can, in the course of investigations, require the disclosure of information about securities and futures contracts, the production of companies’ books, search companies’ premises, and interview individuals. Together with the CAD, it also exercises investigative powers into market misconduct offences (eg, insider trading and market manipulation), money laundering, and terrorism financing.

(e) Singapore Exchange Limited (“SGX”): The SGX acts as the frontline regulator of the securities and derivatives market, tasked with promoting a fair, orderly, and transparent market. In 2017, the Singapore Exchange Regulation (“SGX RegCo”) was set up as a separate entity to undertake all frontline regulatory functions independently of the SGX. SGX RegCo supervises the compliance of listed issuers, their directors, executive officers, sponsors, registered professionals, and issue managers with the Listing Rules, and the compliance of SGX trading and clearing members, their directors, trading representatives, officers, employees or agents with the Trading and Clearing Rules. The SGX RegCo has extensive powers of investigation and enforcement, including the power to issue public reprimands and, if it determines that more severe and pecuniary sanctions are required, charge individuals before a Disciplinary Committee.

(f) Accounting and Corporate Regulatory Authority (“ACRA”): A statutory board under the Ministry of Finance, ACRA is the national regulator of business registration, financial reporting, public accountants, and corporate service providers. Its Compliance Division, comprising both an Investigation and Enforcement Department, is responsible for investigating and ensuring compliance with ACRA-administered legislation. This includes annual filing obligations and anti-money laundering and counter financing of terrorism requirements.

(g) Competition and Consumer Commission of Singapore (“CCCS”): A statutory board under the Ministry of Trade and Industry, CCCS is the national competition regulator tasked with administering the Competition Act and the Consumer Protection (Fair Trading) Act. Its primary mandate is to investigate and deter anti-competitive market practices, such as the abuse of market-dominant positions and mergers and acquisitions that substantially reduce competition within any market in Singapore for goods and services. It has broad powers to conduct investigations if it has “reasonable grounds” for suspecting an infringement, including the power to require the production of documents, to enter premises without a warrant, and to enter and search premises with a warrant. It is also empowered to adjudicate on anti-competitive practices and impose financial penalties on infringing parties.

(h) Inland Revenue Authority of Singapore (“IRAS”): A statutory board under the Ministry of Finance, IRAS is the government agency responsible for the administration of taxes and enterprise disbursement schemes. IRAS investigators carry out investigations into suspected instances of tax evasion and/or fraud, in the course of which they are empowered to conduct dawn raids, interview individuals, require the production of documents, and arrest individuals suspected of having committed serious tax fraud or obstruction of justice.

Since it attained self-governance in 1959, Singapore has had a zero-tolerance policy towards corruption in both the public and private sectors. It now consistently ranks amongst the world’s least corrupt countries. This is due to a strong national anti-corruption framework driven by a strategic political objective to foster a conducive climate for business and enhance economic growth.

The principal anti-corruption statute is the PCA. Corruption offences are typically difficult to prove due to a lack of documentary evidence and a victim who is motivated to tell the truth. The PCA is drafted to increase the powers of CPIB investigators, enhance the punishments for corruption, and plug loopholes that can be exploited by offenders. For instance, there is no requirement that a bribe must be monetary, and where a public officer is proven to have received a gratification from a third party, there is a legal presumption of corruption that is the public officer’s burden to disprove. The PCA also punishes both the giver and recipient of a bribe, and provides that a corruption offence can be made out even if the recipient could not or did not return the expected favour. It also provides for harsh punishments upon conviction (a maximum of five years’ imprisonment or S$100,000 fine or both, with enhanced penalties in certain cases) in addition to an order for the disgorgement of the corrupt benefit to the State. The PCA was last reviewed in 2018.

Most recently in 2022, the High Court laid down an enhanced sentencing framework for private sector corruption in Goh Ngak Eng v Public Prosecutor [2022] SGHC 254 (“Goh Ngak Eng”) that more than doubled the offender’s initial sentence which was based on a 2020 High Court precedent. This was also despite the lack of a cross-appeal by the Prosecution on the offender’s sentence. Apart from providing greater clarity for the sentencing courts, Goh Ngak Eng is but the latest reminder of Singapore’s tough stance against corruption.

The next regulatory frontier is undoubtedly in the wild west of crypto finance. At the time of writing, cryptocurrencies do not have the same legal status as money. They are also not uniformly treated as regulated capital markets products.

In dealing with crypto assets, Singapore’s regulators have adopted an approach that can best be described as a blend of cautious optimism and pragmatic incrementalism. They have recognised the potential of cryptocurrencies to be a credible medium of exchange in the broader digital asset ecosystem, but also the demand for greater consumer protection due to its nebulous nature and volatility.

In October 2022, MAS announced a raft of proposed legislative amendments to the Payment Services Act, aimed at reducing the risk of consumer harm from cryptocurrency trading and supporting the development of stablecoins which are pegged to a single currency (“SCS”). For cryptocurrency service providers, the proposed regulatory measures will control consumer access to crypto assets and regulate the conduct of service providers (eg, by imposing requirements for the proper segregation of customers’ assets and the capacity of critical technological systems). MAS also intends to regulate SCS issuers where the total value of SCS in circulation exceeds S$5 million by imposing audit requirements and minimum base capital and reserve assets requirements, amongst others. The public consultation to these proposed regulations is ongoing until 21 December 2022.

Singapore common law has also recognised crypto assets as a form of property. In CLM v CLN and others [2022] SGHC 46, the High Court held that there were proprietary rights in Bitcoin and Ethereum which could be protected by a proprietary injunction prohibiting any party from further dealing with, disposing of, or diminishing the value of the asset. Therefore it is likely that in any contentious investigation, crypto assets will be treated as property capable of being seized by investigators and crypto scams and fraud will be prosecuted as ‘property offences’, for example under Chapter 17 of the Penal Code.

This is an article by Eugene Thuraisingam and Johannes Hadi, which appeared as an in-depth overview of Corporate Investigations and Anti Corruption in the 2023 edition of Chambers and Partners Asia-Pacific, where Eugene Thuraisingam LLP was ranked in the Corporate Investigations/Anti-Corruption: Domestic category for the second year running. The writers are grateful for the assistance rendered by Ms Rachel Chan, a trainee of the firm, in the preparation of this article. 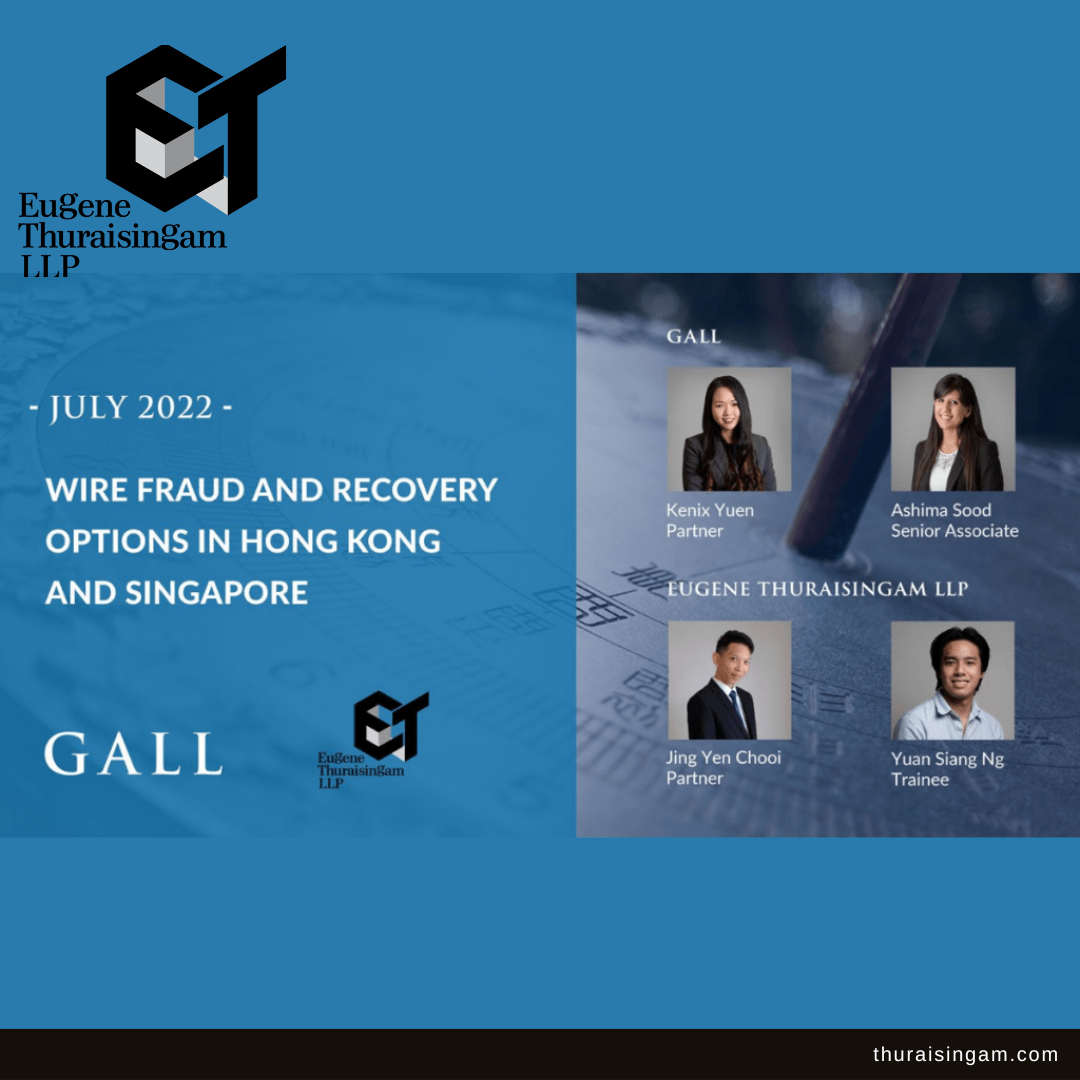 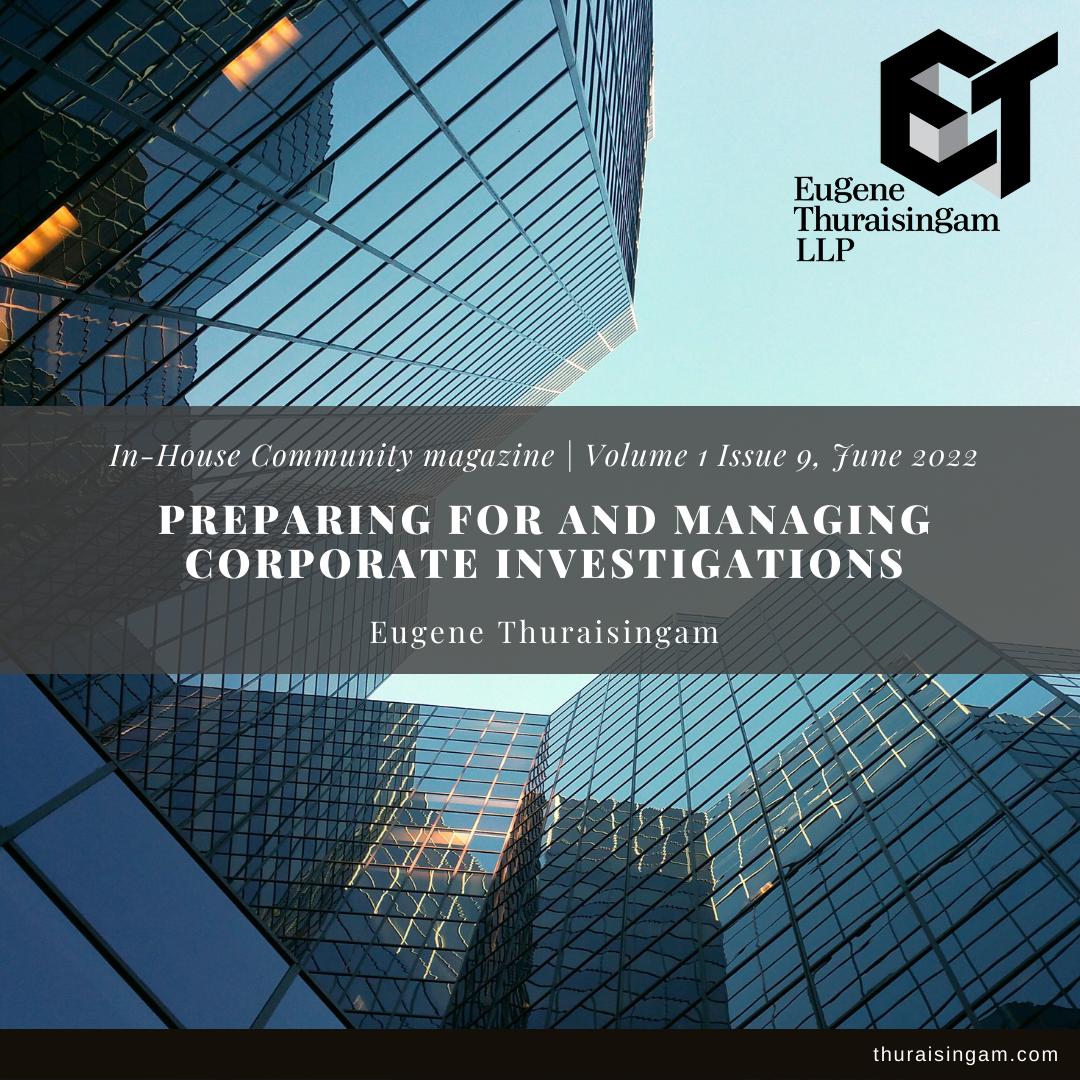 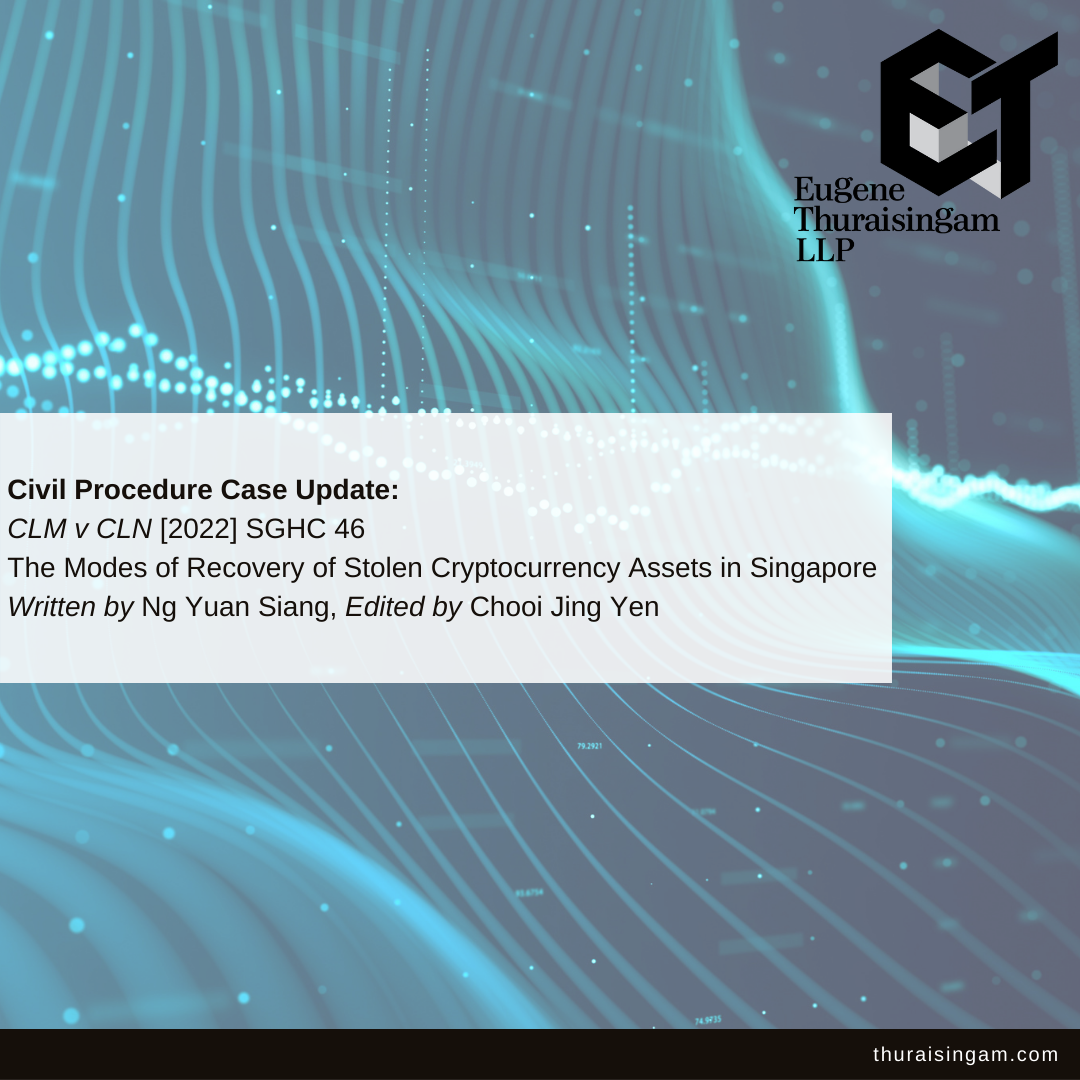 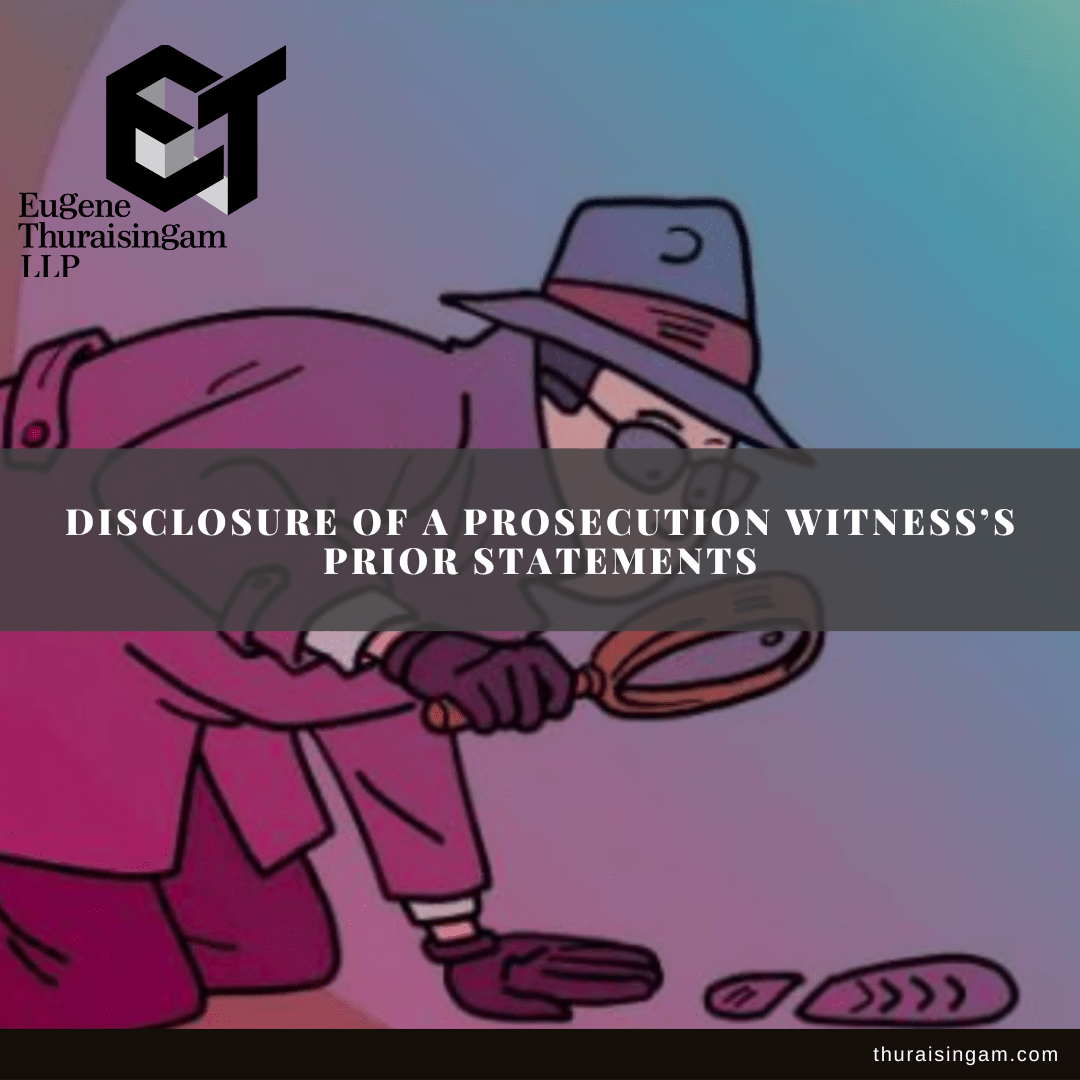 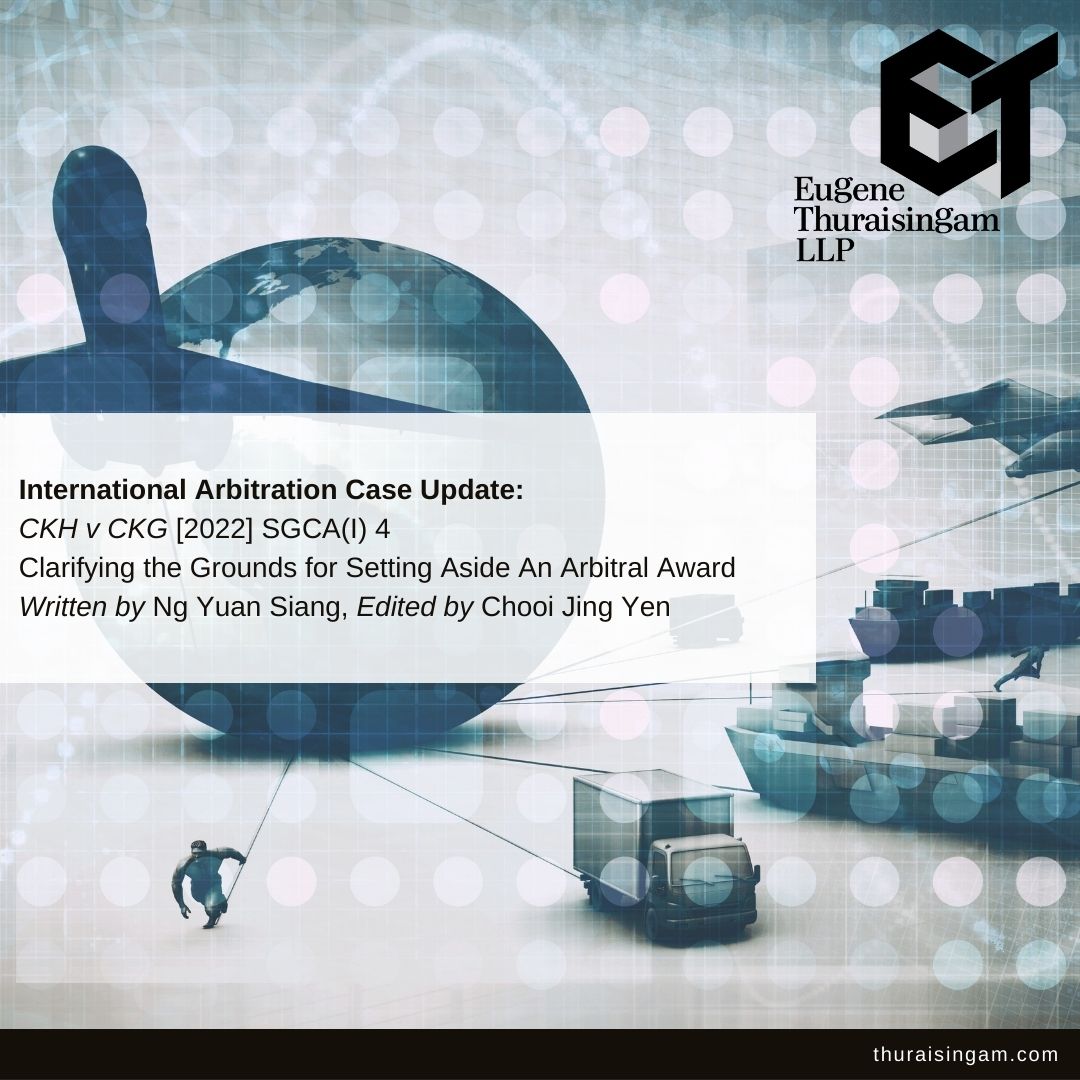 Clarifying the grounds for setting aside an arbitral award

In this international arbitration case update, we summarise the salient points of the latest decision by the Court of Appeal's CKH v CKG [2022] SGCA(I) 4.